The only information I had about the output transformer was the following:

Which is helpful enough for the secondary wiring going to the speaker jack, but wasn't much help for the primary wiring.  On the other side I had three wires: red, brown and blue.

Knowing a little bit about push-pull amps, I know that one of these wires is a centre tap that's going to go to the can capacitor and then back to pin 3 of the rectifier valve (via the standby switch).  On most of the layouts I've seen, that's the red wire.  The other two primaries need to go to pin 7 of V5 and V4.

Knowing that the primary impedance is 8k ohm, I broke out the trusty multimeter and measured the impedance between all three pairs of wires.  (I knew it was never going to be bang on 8k for various reasons, but the connections to the centre tap would be half the impedance of the other pair.) 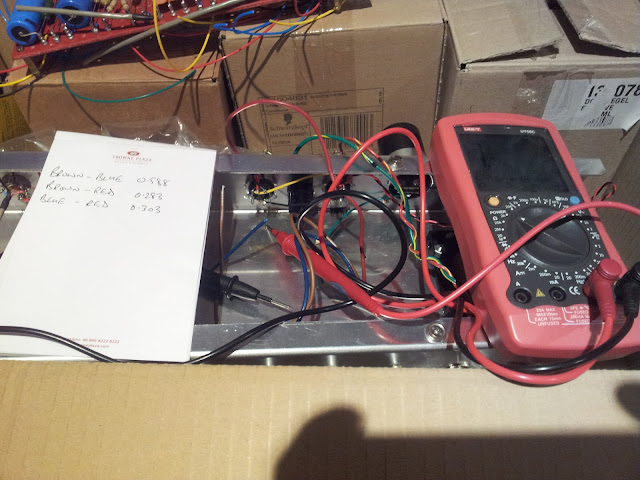 If you can read my notes, the results were:

So red is definitely the CT.  Good to know.  I believe there's a chance I'll get an out-of-phase squeal if I get the other primaries on the wrong power tube, but it's a simple enough job to swap them round.  I've got a 50% chance (and Vin, the kit designer, has pointed me in the right direction - brown V5, blue V4).
Posted by Ben Liddell at 14:14