I'd read that I might have some problems with the tremolo channel and so was prepared for it not to work immediately.  There are various discussions about the right kind of ECC83 to use in V3, with the consensus being that Sovtek is the way to go.

Initially I had no tremolo effect on the channel, no matter what the speed and intensity knobs were set to.  This was using the standard TungSol valve, the same as I've got in V2 (I paid the extra seven quid for a "premium tested" TungSol for V1).  I don't have a whole lot of valves lying around* but I do have a JJ ECC83S from my 5w amp.  I duly tried this and, once again, no tremolo effect.

I knew there was an ECC83 in my little blackstar, and I'd heard they used Sovtek valves as standard so I took the screwdriver to it. 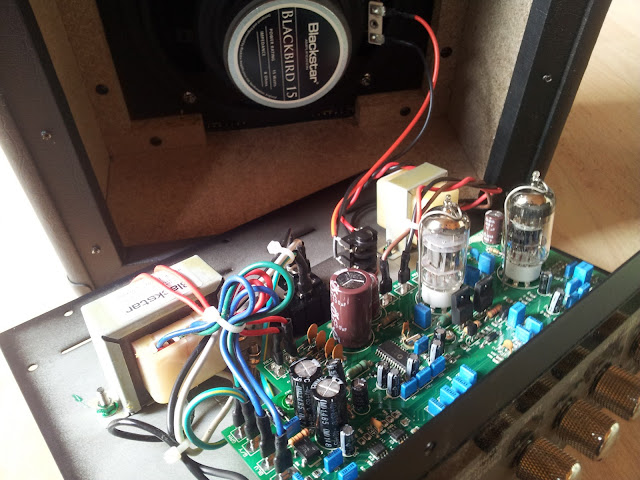 Nice little amp but I'm not sure I like seeing valves next to ICs.

Anyway, once I'd forced the Sovtek from there into V3 (it seemed "fatter" and I really struggled to get it into the shielded base on the 1973) still no tremolo.

It was then I began to doubt my own sanity, and in particular my understanding of the "Cliff" type jack socket - and which lugs are connected at which time.  The picture below is a bit blurry but it clearly shows the incorrectly wired tremolo switch socket - the ground is wired across so with no jack in it it's going to be off. 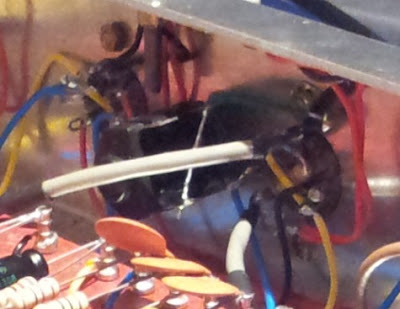 Without powering down the amp, I very carefully snipped the diagonal wire with my insulated snippers (don't try this at home) and suddenly I was awash with tremolo.

I tried it with all the valves and it worked strongly with all of them and perhaps too strongly with the JJ ECC83S.  At one point I started getting a bit of interference so I gave the wires to V3 a bit of a prod with my insulated prodding tool and it all settled down. 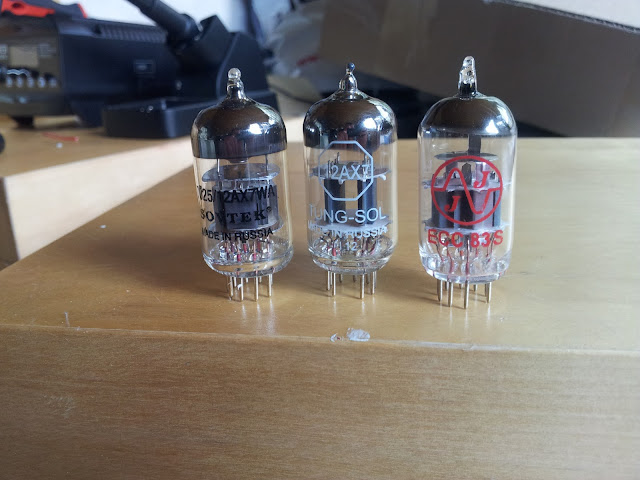 *Thinking about it, I probably have a total of 12 valves in the house which is probably more than average.
Posted by Ben Liddell at 14:08